Simon Allen on Nature & the Influence of the Cornish Landscape

As international art consultants, Artelier specialises in curating art for luxury residential, hospitality, yacht and aviation projects. Artelier's Artist Walls presents a collection of artists whose originality of ideas and dedication to their materials makes them true contemporary masters. Through collaborating with Artelier, they have created large-scale custom art commissions that reinvent the concept of the mural for the modern age, pushing the possibilities for feature wall art.

In a two-part instalment of Artelier's In the Studio series, curator Alina Young talks with Simon Allen about the evolution of his sculptural practice and the influence that nature has on his work. Here, Allen shares how his studio's proximity to the Cornish coast inspires his practice, as well as the techniques he uses to evoke nature in sculptural forms.

In the context of your studio, how do you feel about being so close to the coastline, and what effect does it have on your work?

It's absolutely crucial, it's the source of all the inspiration. I regard myself as a landscape artist. Being here within the landscape is what feeds the work, feeds me. We live in a farmhouse with studio barns on the edge of the moorland, you go down onto the cliffs, and there's the sea. It's an elemental and raw environment to be in, which is vital. I've used Jackson Pollock's quote in artist's statements in the past, where he said, "I am nature." As an artist, you can assimilate your environment, you can assimilate all the forces the natural world has, without needing to depict them in a literal way. They can come through you, and manifest in the kind of marks and forms you make. I see myself as an assimilator.

Do you feel that the elemental comes through in the physicality of creating the artworks?

Definitely; a couple of years ago, I came up with a way of working where I carved the surface against the grain of the wood, and that brought up a random, genuinely chaotic, but very intricate and delicate surface. That was a key point; until then, I only had a flat or smooth surface. This new way was like a sculptural equivalent to what a painter has in a gestural sweep, where the paint brush would sweep across the canvas and it would get all that energy within the texture and detailing of the paint. Finding that unlocked a whole host of forms and imagery. It was Expressionistic; I'm a huge admirer of American Abstract Expressionism. I love the way they used their bodies' gestures to mirror what happens in nature, or to communicate a more spiritual or emotional way of working. It's all in the gesture.

What's strange as a sculptor working in a reductive way, carving, is that the ‘gesture’ is actually everything I don't do. What's left – it looks like a gestural sweep, but actually I've taken away everything that isn't that. So, over the years I’ve developed this strangely inverted way of thinking. I like the implied danger, in that once it's gone, it's gone. There is a kind of tension when you start working, which brings its own kind of focus.

But, you also have to let go. It's a strange balancing act because I work with power tools, which allow me to achieve the fluidity I'm after. I'm able to work into a resistant material like wood with tools that go into it like a hot knife through butter. Chipping away with a mallet and chisel just wouldn't get me where I want to be. There's an embrace of modern technology, modern ways of working.

Do you find you go to your natural surroundings when you need to be inspired visually?

Always. When I lived in London, I was fairly "in there" in the commercial gallery art world. But also, ever since I was a young boy I've gone around the museums and public art galleries in London and just absorbed all those amazing artworks. Yet, there did come a time when I was standing in the National Gallery in the Sainsbury Wing looking at these incredible Renaissance paintings, and I thought, "You know, I'd far rather just be walking on the cliffs towards Land's End." In a way, I've absorbed as much as I need of those artworks. I can close my eyes and conjure up in some detail most of them. It's more important to me to be in nature rather than in culture. For a lot of artists it's the other way around, and I respect that, just personally I feel I need to be stimulated by the natural world rather than art history.

Perhaps nature has more variations compared to culture, whereas

it can take a long time for culture to have the same effect?

Yes, and your stimulus can be based upon somebody else's stimulus, but unless you're very careful it's a closed circle.

You find you start where they ended, and then you end

where someone else started, and round it goes. Whereas

with nature, it's just so open-ended and enormous. There's no limit, it always has more to offer, and that's just wonderful.

Does taking inspiration directly from nature help your response to be authentically yours, rather than being through someone else's lens?

Absolutely. When I read art historians' books, they tend to want to contextualise everything, seeing how one artist is influenced by their predecessors or their peer group, and creating a nice, neat lineage. That's not always the case. Sometimes things just come randomly at an artist, and it's not through another artist's work, it can be the materials that inform that. Or it can be a walk along a cliff in a gale, and just seeing the power of the sea thundering against those rocks, which makes a certain sort of mark seem right when you do it.

Let's not underestimate the accidental – the trick is recognising when the accidents are worth keeping, that's the true skill. Quite often you start off with an intention, and along the way something else happens. It may not be good and needs editing out and re-working, or it can be not what you intended, but still have something that's equal to what you intended, and therefore is worth keeping.

In terms of accidents, what are you experimenting with now in your art commissions? What's something that you're trying to realise at the moment, and finding the techniques for?

I'm working on rubbing through the leaf to the ground below, so you've got a double-layered surface with the coloured ground of the wood shining through the reflective surface of the gold leaf. That's particularly stimulating at the moment. I've been feeling over the past few years that I've branched into all these different areas; in the past whenever an exhibition has happened, a body of work has taken on an identity of its own and the subject has been fairly consistent.

I had an exhibition called 'Shifting Sands', which was about the ridges in the sand that are created as the tide recedes. I had another exhibition called 'Fluid Forms and Shadow Forms', which was about when light hits shallow water in a stream, and you get these little refracted currents and eddies and whirls. That speaks to the microcosm and macrocosm idea I’m interested in; these are tiny little whirls in a stream, but some of the forms created are the same as you see on weather maps, of fronts coming across the Atlantic ocean. What could be a thousand miles from end to end, is echoed in these tiny whirls. 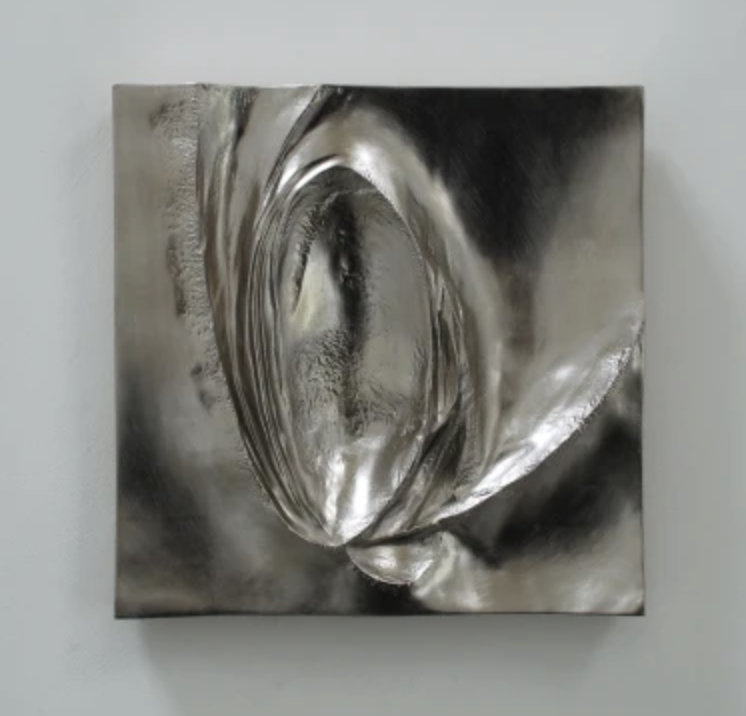 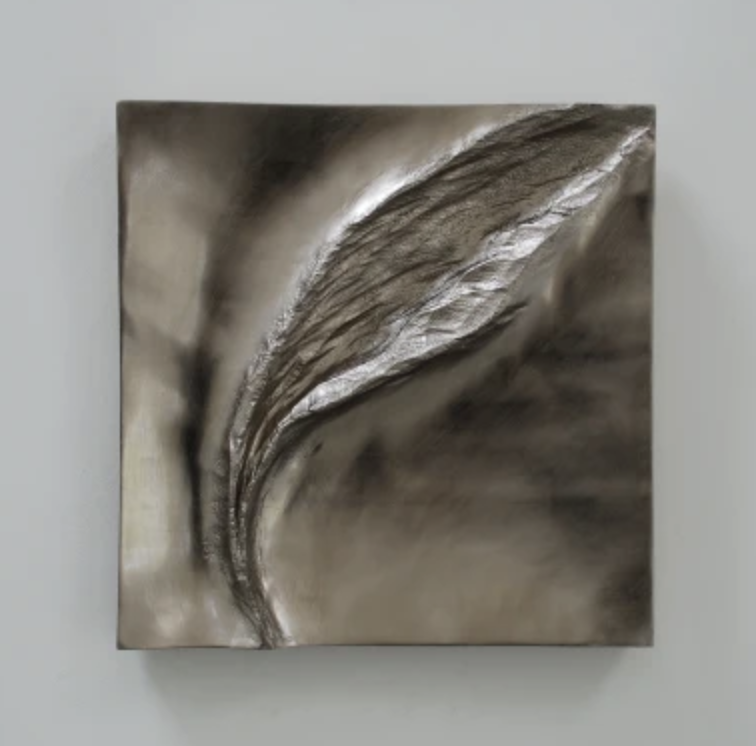 I've gone down all these different branches, and at the moment I can't see any new ground, as such, that I want to explore, but of those branches there are plenty of twigs. I certainly haven't said everything that needs to be said about those subjects. There's a need to revisit sources and forms; thinking of exhibitions which happened ten years ago, I'm ten years wiser now. There's more to add. I see the work becoming this more and more so, one of refining, re-stating, rediscovering within a language I've already created. I'm very happy with this language, and it's all about nuance now.

Is there something meditative about your artistic process? You referred to the spiritual aspect that many artists have taken from the forms and gestures of nature, is there something of that in your practice?

Very much so. It's almost Dr Jekyll and Mr Hyde. I've got two studios - the carving studio and the gilding studio. In the carving studio, I'm not kidding, it's probably waist deep at one end in sawdust chippings. It's like a blizzard of sawdust has happened in there. It's only got the one light in it, so I can create raking shadows on the work. So it feels like going into this dark cave, which I'm able to carve to my heart's content in.

Then I've got a light-filled studio which is nice and warm, where I can listen to music and calmly gild. There could not be a greater contrast between those two places, and I love that dual nature of the practice. How in one of them, if

you're in the right mood, is exactly what you want to do – you want to expend energy and express yourself and be vital. And some other days you want to be really quiet and calm, and the gilding allows for that, even to the point of how you breathe when you gild. You have to have a calmness, and I always gild standing up because of the scale; I need to be able to reach across and into the middle of it.

You mentioned how it's possible for you to let go despite the consciousness of being careful and precise. Do you feel that within that duality of the two studios you let go in different ways?

It is a different way. The letting go of carving is a physical letting go, you literally have to un-tense yourself and allow those body gestures, as you hold a power tool and sweep your arms across to create an arc, a natural arc. If you want that arc to flow, you've got to ease off a little bit, allow your muscles to relax.

Whereas, the relaxing in the gilding space is more mental. It's a case of allowing the rhythm of laying the leaf to enter you. It's strange, because I have found that in gilding these recent pieces where I'm rubbing through the leaf, you want to overlap each leaf by exactly the same amount; when it's rubbed through, the overlaps of the leaf create a grid like structure, through which you look. All of those overlaps should be consistent. But, if you think about it too much, it doesn't happen. If you just allow it to happen while you're thinking about something else, it's far more likely to be consistent. It's a strange paradox, where in order to do some things well it's better not to think too much, because you become conscious and therefore nervous. To let go of that and instead allow in the unconscious, often results in the best work.

To hear more about Simon Allen's journey as an artist, and how his experience as a gilder in a high-end picture framer informed his current practice, take a look at the second part of Artelier's In the Studio interview here. Simon Allen is featured in Artelier's Artist Walls collection, and has a dedicated page on our website.

Artelier's art consultancy plays a fundamental role in all artwork commissions, and as the appointed art consultant for projects we bring artists and clients together to achieve forward-thinking and intelligently curated art installations.

Janine Lambers on the Ancient Craft of Gilding & her Artistic Journey